The Belize Barrier Reef is the largest living reef in the Northern Hemisphere, with an area that stretches about 300 kilometres. The reef is a UNESCO heritage site, and it’s the second-largest reef system in the world with its seven sites (Bacalar Chico National Park and Marine Reserve, Great Blue Hole, Half Moon Caye, South Water Caye, Glovers Reef, Laughing Bird Caye and Sapodilla Cayes) showcasing how a reef develops.

The reef stands out thanks to its untouched, pure condition and large size. It also has unique features, including many different reef types in one area, atolls and mangrove cays located away from the shore.

This is one of the most infamous atolls since it’s where the Great Blue Hole is located. While it’s the smallest of Belize’s atolls since it only covers an area of about 200 square kilometres, there’s lots to be seen in these crystal clear waters. The Half Moon Caye natural monument can also be found in the southeast part of the reef.

This atoll is home to king mackerel, eagle rays, bonefish, tarpon, groupers and many other sea creatures, along with astonishing coral formations and sea sponges. But the main creatures you’ll want to see are the gentle whale sharks commonly seen in this area between April to June. They’re a rare sight around the world and Belize is the place to catch a glimpse of them, much less swim with them if you’d like.

Located on the southern tip of Turneffe Atoll, The Aquarium (also called Long Caye Aquarium) is a popular Belize dive destination because it attracts a variety of colourful marine life and has a magnificent 50-foot wall.

Often overlooked because of its proximity to the Great Blue Hole, this Belize barrier reef destination is teaming in schools of fish that live within the lush coral gardens and is always a favourite dive destination for our guests. Starting at the tabletop formation, your dive excursion will have you surrounded in colour and provide you opportunities for brilliant photographs of coral, cleaning stations, and sea life. From there, your dive leaders will lead you to the wall where you can head into the deep blue waters to explore the black coral formations and seek our larger fish, like tiger groups and barracudas.

Learn more about The Aquarium

This atoll is one of the best dive areas in Belize, with more than 70 sites to visit. You’ll be staying in the heart of it all. During your diving adventure, you’ll have sufficient cover from mangroves in the area and access to a shallow lagoon. The area is home to many schools of colourful fish, such as baitfish, cubera snappers, tiger grouper, filefish and white-spotted toadfish, along with other aquatic life, such as manta rays, hammerhead sharks, eagle rays, turtles, nurse sharks and reef sharks.

Located in the world-famous Half Moon Caye, the Half Moon Caye Wall is part of a nature reserve protected by both the Belizean government and South American law. A beautiful and lush ocean wall with an array of different sea creatures including groupers, toadfish, razorfish, and yellowtail snappers, The Half Moon Caye Wall is an extremely popular diving site in Belize that is friendly to divers of all skill levels.

Unlike most of Belize’s popular diving sites, the Witconcrete Wreck is a very new destination (dating back to just 2021), and it’s man-made! In September of 2021, the Belizean government decided to sink a historical 375-foot shipping vessel to not only create a new and unique dive spot but also to provide a man-made coral for the sea creatures of the Caribbean ocean. You can dive around this eighty-year-old ship that once carried supplies during the second world war, and admire the historic value as well as the beauty of the new sea life that has decided to call the vessel home.

Learn more about the Witconcrete Wreck

Eagle Ray Wall is located very close to Belize Dive Haven and consists of an oceanic wall just  30-130 feet under the surface of the ocean. As the name suggests, Eagle Ray Wall is abundant with eagle rays that swim through the area on their wings, reminding divers of large birds soaring through the sky. While Eagle Ray Wall is recommended for divers level intermediate and above, there are several shallow areas surrounding the wall that are perfect for snorkelers of any skill level!

Cathedral Reef gets its name from its stunningly tall and extravagant spires of coral formations that are reminiscent of cathedral towers. Divers come to Cathedral Reef for the beauty of the coral formations alone, however, it’s also home to a diverse community of sea creatures, including some fan favourites like a moray eel, french angelfish, groupers, lobsters, eagle rays, and turtles. As the huge spires of coral provide safety, protection, and growth of food, many creatures call Cathedral Reef home. Divers can choose to stay at the top of the reef which is only about 30 ft/9 m in depth, or they can choose to dive deeper into the reef, which makes Cathedral Reef a great space for both beginner and experienced divers.

Find out more about the different diving sites the Belize barrier reef has to offer and what you need to know about diving.https://belizedivehaven.com/scuba-dive-in-belize/ 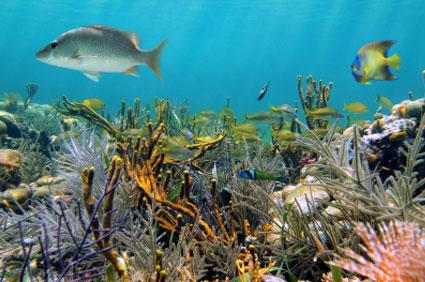 Belize Dive Haven is a premier diving resort, but that doesn’t mean there aren’t other activities to enjoy before or after a dive trip. As many of our guests have discovered, there is amazing fishing in Belize, right at the…